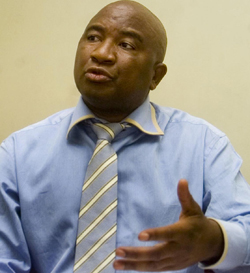 CAPS United chairman Advocate Lewi Uriri has dragged the “demonic” Philip Chiyangwa led Zimbabwe Football Association administration to the courts over his weekend suspension.
ZIFA, at the weekend, announced that it had provisionally suspended Uriri from associating with national football affairs because he conducted an unsanctioned meeting which discussed.
Chiyangwa, through his spokesperson, Xolisani Gwesela, said Uriri at the alleged meeting he held at Rainbow Towers in October incited Premier Soccer League clubs’ representatives to defy a decision on promotion and relegation which had been passed by the ZIFA congress earlier on the same day.
Through his conduct, Chiyangwa said Uriri breached Article 17 (2) of the ZIFA constitution.
Responding to the suspension Mondayin a letter to ZIFA, Uriri said complying with Chiyangwa’s “imagined” suspension would be “like trying to appease an evil spirit”.
“The more one does so, the more the foul spirit demands one’s soul, body and spirit. I refuse to sell my soul and integrity,” he said.
“Henceforth, and within the confines of the law, I will fight fire with fire, and thunder with thunder.
“Diplomacy has not worked, and as Bismarck would say, great matters of the day will now have to be resolved by ‘blood and iron’ within the confines of the law. The battle lines are drawn.”
Uriri said Chiyangwa did not follow the proper channels of disciplining ZIFA stakeholders.
“The decision you have communicated is illegitimate and immediately null and void without further ado. It is not a result of the legitimate excise of administrative authority,” said the Caps director.
“It is, on the contrary, the culmination of a vindictive agenda which has as its purpose the annihilation of the PSL and what it stands for.
“It is a furtherance of the entrenchment of a regime devoid of vision and strategy to emancipate Zimbabwe football from its present chains. This misdirected strategy of self-preservation abhors independent thinkers. It abhors intelligence.
“It has been used to hold ZIFA’s institutions captive to the whims of a cartel whose self-serving interests are inimical to the interests of football.
“You will agree with me that it is this kind of misdirection that has taken Zimbabwe football from the pit it was in on 25 July 2015, and tossed it into a near abyss.” Advertisement

The Harare lawyer said Chiyangwa was targeting his opponents in the soccer industry to eliminate and replace them with his allies.
“There are no functional structures at ZIFA. This power-hungry cartel of bogus administrators has centralised all administrative functions.
“They have interfered with the Disciplinary Committee. They have rendered the position of the legal advisor installed by Congress, Ralph Maganga nugatory.
“They have taken over the function of literally every committee. Constitutional functionaries are imposed on the basis that they ‘voted for me’.
“Offices are created for unpopular persons who ‘voted for me’. Those perceived to have ‘voted against me’ have been purged; starting with Twine Phiri. People have been suspended, expelled or banned without due process.”
He added: “My solicitors in Birmingham, United Kingdom, Genesis Associates Solicitors as well my attorneys in Zimbabwe, Coghlan, Welsh & Guest have been duly instructed.
“You will be hearing from them in short cause.”