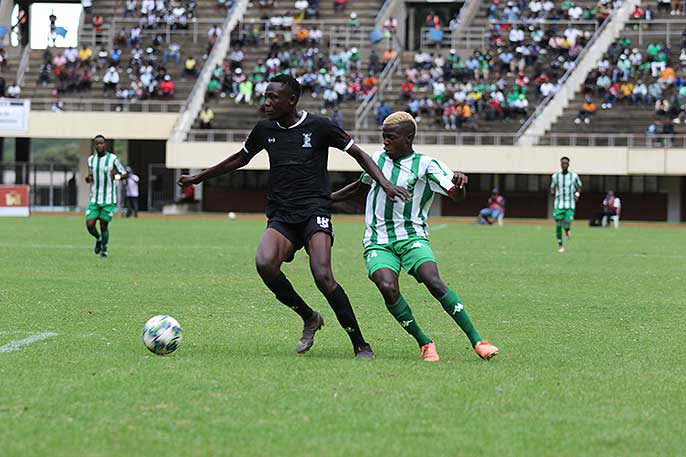 THE much-anticipated Battle of the Cities between Caps United and Highlanders lived up to the hype but in the end the two sides could not be separated after sharing the spoils in a one-all draw at the National Sports Stadium on Sunday.

In what was a game of two halves, Caps United were dominant in the opening half with some good attacking play.

The hosts deservedly took the lead in the 20th minute courtesy of a close-range finish by striker Clive Augusto.

The former Ngezi forward showed his predatory instinct inside the box to latch on to a brilliant cross from the left flank by speedy winger Phineas Bhamusi.

The goal was just reward for Makepekepe, who were clearly the better side after recovering from a shaky start in the early moments of the contest.

While Caps were clearly the better team in the opening half, the second stanza completely belonged to Bosso, who dominated possession for long periods, while keeping their opponents pinned in their own half.

Bosso were eventually rewarded for their dominance when they found the equaliser in the 76th minute courtesy of a long range freekick by Nqobizita Masuku.

Masuku, who is fast establishing a reputation as a dead ball specialist, beat the Caps United goalkeeper Tonderai Mateyaunga with a sensational curling shot from way outside the box.

It was the midfielder’s third goal from a freekick this season and his fourth in total.

Caps United, who looked disjointed in the end were lucky to come out of the contest with a point as Bosso created the better opportunities.

Despite the intense pressure from the visitors substitute Joseph Tulani almost scored 11 minutes from fulltime when his goal-bound header from a few yards out was cleared with the Bosso goalkeeper Ariel Sibanda badly exposed.

Highlanders however had the more opportunities to claim all three points with the best of the lot falling to substitute Washington Navaya, who forced a brilliant save from Mateyaunga on the stroke of full-time.

The share of the spoils means Caps United moved to eighth position on 11 points from eight matches, while Highlanders are now 11th on the log on nine points.