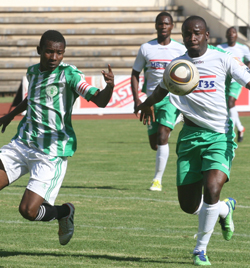 CAPS United strolled past Tripple B and into fourth place in the Castle Premiership on Thursday after Hardlife Zvirekwi’s double set up a 3-0 win at the National Sports Stadium.
With the win, CAPS dislodged FC Platinum who beat Hwange 1-0 on Wednesday, and now have 35 points from 20 matches in comparison to the platinum miners’ 33.
Zvirekwi, a member of the triumphant national team that qualified for the 2014 African Nations Championships (Chan) finals set for South Africa next year, had the ball in the nets in the 33rd minute to give United the lead.
With the first half drawing to an end, the midfielder saw his deflected free kick settling in the nets with Tripple B goalkeeper Tapiwa Mafunga beaten.
Then Dominic Chungwa ensured the massive victory ahead of the Harare derby against Dynamos when he tapped home from a spilled shot.
At Luveve Stadium in Bulawayo, How Mine and Black Mambas drew 0-0.
The league will take another break this weekend to accommodate Zimbabwe’s 2014 World Cup qualifier against Mozambique on Sunday.