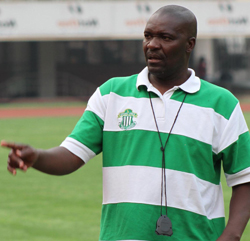 CAPS United coach Taurai Mangwiro sensationally quit the club on Sunday after a 3-1 drubbing by Shabanie Mine as Highlanders and Dynamos also dropped points on a dramatic day in the premiership.
Dynamos were held to a 0-0 draw by Monomotapa at Rufaro while Highlanders needed an own goal, two minutes from time, to get a point from Buffaloes in the 1-1 draw at Sakubva.
Calisto Pasuwa’s side lead the standings with 42 points while Highlanders and Harare City are second with 41 points each.
At Maglas, Caps owner Twine Phiri watched the drubbing and left immediately after the game before an emotional Mangwiro addressed journalists covering the match.
Last week, Caps United players went on strike over unpaid salaries stretching back three months and reportedly appealed to former director Farai Jere for assistance.
Brenna Msiska, the club’s assistant and goalkeepers’ coach together with Saul Chaminuka, the first assistant are likely to be given the nod to take over for the last seven games of the season and their Mbada Diamonds Cup quarterfinal match against Chicken Inn on Saturday.
Msiska was in charge at the start of the season after Caps fired Mkhuphali Masuku, now an assistant coach at Chicken Inn.
Mangwiro said on Sunday: “I think I have done the best for the club and it is time for me to move on.
“It is unfortunate that I have to make this announcement through the media before communicating with the relevant authorities but since there was nothing binding between me and them I think it is appropriate that I say goodbye in this manner,” he said.
He claimed there were a lot of squabbles and said there were sinister forces at work that were sabotaging him.
“There are a lot of squabbles at the club which I feel affected my work and I was the biggest loser at the end of the day. I don’t see the team winning if I stay and it is in the best interest of team that I leave,” he said.
“It’s not a secret that there is a lot happening behind the scenes. There is a lot of sabotage and if people want you out they will make sure you go.”
Pervington Zimunya scored twice in the 40th and 64th minute and Caleb Masocha added the third in the 66th minute. Moses Muchenje converted from the spot 10 minutes from time for the Caps face saver.Advertisement

Dynamos held
Meanwhile at Rufaro, Dynamos suffered another reversal after being held to a goalless draw by a battling Monomotapa.
Pasuwa’s side went into the match seeking redemption after they were handed a 4-2 defeat by Hwange in a midweek league match at the Colliery.
But they failed to break down a resilient Monomotapa with their forwards missing a number of good chances.
With Highlanders and Harare City also being held to 1-1 draw by army side Buffaloes and Chicken Inn respectively, the three top teams remain separated by just a single point with Dynamos remaining on top with 42 points.
Sunday’s draw was Dynamos’ ninth draw of the campaign with only seven matches left before the curtain comes down on the season.
Dynamos, who gave one of the youngster Blessing Moyo his debut, started off brightly but struggled in the final third.
Benjamin Marere had a good chance on 14 minutes but shot meekly at the keeper.
Monoz however, wasted a good chance five minutes later after Ismael beat defender Augustine Mbara but his cross in the danger zone found no takers.
Then Allen Tavarwisa missed a headed opportunity which could have seen Monomotapa take the lead on 20minutes.
Clive Kawinga was also unlucky on 22 minutes after beating defender Last Sithole only for his well taken shot to crash against the upright post.