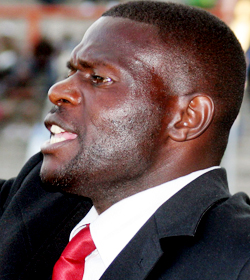 CAPS United staged a dramatic come back from behind to edge Harare City 2-1 in a Castle Lager Premiership tie at the National Sports Stadium on Sunday.
The victory saw Caps United maintaining their unbeaten run in the league in which they have beaten Chapungu drawn against Ngezi Platinum.
Dominic Chungwa decided the contest with a low shot late in the second half after Harare City had raced into the lead two minutes after restart through Honey Chimutimunzeve.
After a slow start in the first half in which Harare City dictated terms and were eventually rewarded into the lead on two minutes through a strike by Honey Chimutimunzeve who profited from a set up by Raphael Manuvire, Caps United refused to be cowed into submission as they also threatened with some fine raids. But Harare City also had chances with Chitiyo and Phineas Bhamusi coming close on 22 and 27 minutes.
Caps, however, were rewarded for their industry with Joel Ngodzo drilling home from a set up by Bhamusi.
In the second half, Caps United coach Lloyd Chitembwe brought in Tafadzwa Rusike for Kudzanai Nyamupfukudza which proved a master stroke as Rusike set up Dominic Chungwa who had the simple task of drilling the ball into the net to ensure maximum points for his side.
The victory is a confidence booster for Caps United who face old rivals Dynamos in the Harare derby next weekend.
Chitembwe was happy with the victory.
“In the first half we didn’t play well but we dominated in the second half. We brought in Rusike in the second half for Kudzi whom I think had a brilliant game. We needed someone we thought could give us the leverage going forward and we are happy it worked well for us. That we are still unbeaten helps to build confidence in the players,” said Chitembwe.
Harare City coach, Taurai Mangwiro, said he lost in close contest but admitted they were their worst enemies.
“We lost in a very close contest but I think we were our own worst enemies. We were slow in curtailing their movements especially on the wing where Phineas Bhamusi was giving us all sorts of problems. When Caps United scored their first goal, it gave them hope and they scored the second,” said Mangwiro.
Teams:  Caps United. J Muchambo, H Zvirekwi, R Pfumbidzai, J Jangano, S Makatuka, K Nyamupfukudza (T Rusike),  M Muchenje, P Bhamusi, J Ngodzo, (L Tsipa 87), S Nhivi (D  Dauda 68,) ChungwaAdvertisement