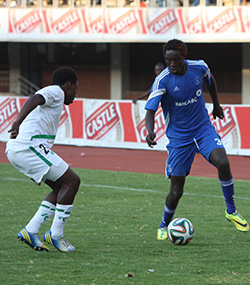 THE 2014 Castle Lager Premier Soccer League action resumes this weekend, with a number of mouth-watering fixtures lined up for the second half of the season.
Traditional rivals Dynamos and Caps United face off in their fourth meeting of the season.
They met in in the Zimbabwe National Army Charity semi-finals before the season started with Caps United wining the contest 1-0 to dump Dynamos out of the final following a strike by Dominic Mukandi.
Their league meeting two weeks ago ended in a 1-1 stalemate.
But Dynamos got the better of their opponents dumping them out of the Net One Wallet Cup on Sunday through a solitary goal by Rodreck Mutuma.
On Sunday they meet again with the Green Machine hoping to end that lengthy barren run against Dynamos whom they lasted beat in a league match in 2009.