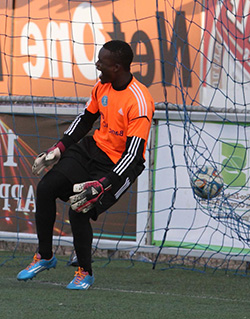 CAPS United coach Mark Harrison returns to Rufaro Stadium on Sunday afternoon for yet another cup final-the Bob91 Super Cup-against rivals Dynamos, aiming to complete a hat trick of wins over the country’s two biggest clubs.
After accounting for Dynamos 6-5 on penalties in the Sino-Zim Cement Cup, Caps bundled Highlanders out of the Bob91 play off last week at Barbourfields to set up an epic duel against the blue half of the capital.
For Harrison, this is not about winning trophies and setting the stage for the 2015 Castle Lager Premier Soccer League, but gauging his team’s readiness for the new season.
“These are pre-season friendlies, nothing more. And we are happy to be playing them. They give us an indicator of where we are and how far we have to go before we can reach the levels I want.
“Remember in the first match against Dynamos I said the team was not where I wanted them. There were shades of improvement against Highlanders because they (Highlanders) presented us with free flowing football and we saw some gaps.
“Now on Sunday, we have been trying to cover those gaps and we want to implement some of the techniques and see the response. Obviously, a win will be good for the confidence of the boys.
“I am still looking at a number of boys in various positions and see what we can come up with,” Harrison said on Thursday.
Two other players under consideration at Caps are former Highlanders stars Joel Ngodzo and Hillary Madzivanyika.

The man that has been making all the noise at Caps is former Dynamos striker Rodreck Mutuma. He is expected to lead the attack against his former side and will be happy, again, to be on the score sheet.
Mutuma scored in the shootout against Dynamos and also in the 2-1 win over Bosso. The other goal came from Takudzwa Mahori.
Playing alongside veteran Leonard Tsipa gives Mutuma some confidence and space to attack defence although the former, at 35, is no longer a 90 minute player.
For those that left Caps for Dynamos, Dominic Chungwa and Kelvin Bulaji, it has all been doom and gloom, but they have yet another chance to impress David Mandigora on Sunday afternoon.
Dynamos are in this final as the defending champions and would certainly not want to lose two games to Caps United in a row.Advertisement

Said Mandigora: “We are not under any pressure at all. The season has not yet started but it will be good for us to gain some revenge in this match. We did not play badly in the last match, not at all.
“We came from a goal down and in penalties it’s anybody’s game; so I can’t use that as a measure that we played badly.”