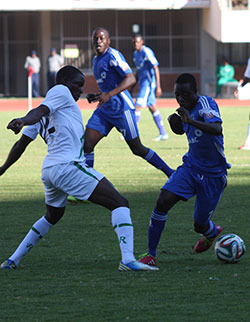 Caps United 1-1 Dynamos
PERHAPS the best result from this much talked about Harare Derby was a draw.
And the Castle Premiership, which was supposed to witness top class football on Sunday along with a number of goals, eventually saw a share of the spoils after Dynamos failed to get one over the green half of the city, Caps United.
It took a 34 year-old Murape Murape 11 minutes to set the stadium alight with a rising shot from inside the box and it all seemed to be going according to script for the defending champions until  a 20-year old, Gerald Phiri decided otherwise with a superb second half free kick in the 58th minute.
Coach Callisto Pasuwa had spent two weeks attending a coaching course with his Caps United counterpart Taurai Mangwiro. Both returned Sunday to lead their respective teams, but neither could find the winning formula.
Not that chances were not created; they were, but the accuracy of the strikers left a lot to be desired.
Devon Chafa hit the upright after a cool lay off from Rodreck Mutuma. But a minute later, Mutuma and Ronald Chitiyo combined to set up Murape for the opener for Dynamos.
Pevington Zimunya’s free kick was tipped over by Dynamos goalkeeper Artwell Mukandi before Chafa hit the nets in the 30th minute only to see his effort ruled out for offside.
Ocean Mushure and Washington Pakamisa had further chances to increase Dynamos’ lead before the breather but they failed to convert.