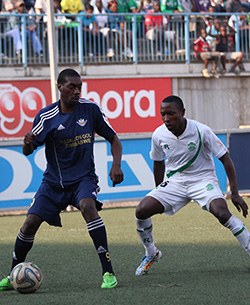 HARARE giants Caps United were held to a draw by giant killers How Mine in a in a Castle Lager Premiership tie at Rufaro Stadium on Sunday.
It was United’s second consecutive draw following a 0-0 draw by Bantu Rovers in their previous match.
Sunday’s draw saw Caps remain unchanged on the league table where they are fourth with 39 points – four adrift of leaders and bitter rivals Dynamos.
The result did not go down well with Makepekepe fans as they insulted coach, Taurai Mangwiro, at the end of the match.
The fans accused Mangwiro of deliberately settling for a draw in order to maintain the gap between to rivals Dynamos, arguing he was sympathetic to Dynamos since he was a former player.
Dynamos were also held to a 0-0 draw by FC Platinum at Mandava Stadium on Saturday.

Not overly impressed with their coach … Caps United supporters on Sunday