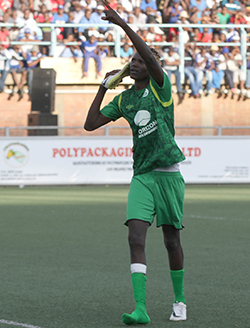 HIGHLANDERS and Caps United face the wrath of Zifa following two incidents of violence during their Bob 91 Super Cup playoff match at Barbourfields Stadium in Bulawayo on Sunday.
Caps goalkeeper Victor Twaliki was struck with an object before Highlanders scored their goal and the Green Machine fans responded by pelting his opposite number Arial Sibanda with water bottles.
The match was stopped for 12 minutes as police battled to restore order.
In a statement on Monday, Zifa communications and media manager Xolisani Gwesela said:  “We are saddened by the growing unwelcome habit at match venues across the country which is tainting the image of Zimbabwean football at the same time risking the lives of peace loving football supporters.
“It is disturbing that the twelfth player is still grappling with the basic tenets of fair play.
“We are going to look into the incident and all found to have crossed the line will be duly punished since this reflects negatively on our game and it endangers the lives of many innocent fans.
“It is high time these unruly elements get their deserved punishment since they have been taking football for granted for a long time with only their clubs feeling the pinch of paying fines.
“Nonetheless, we also encourage clubs to engage their supporters and enlighten them on the dangers and costs of hooliganism.”
Last week, in the Sino-Zim Cement Cup final between Dynamos and Caps United at Rufaro Stadium, missiles were thrown into the field of play.Advertisement