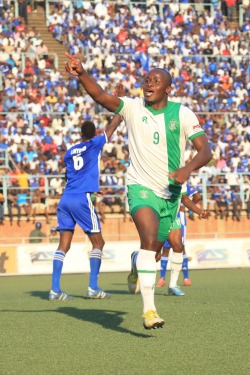 CAPS United underlined their title credentials-staging a dramatic come back to secure a crucial point in a 3-3 draw in the Harare derby at the National Sports Stadium on Sunday.
The Green Machine had looked dead and buried after Dynamos raced into the lead on seven minutes through striker Rodreck Mutuma before further goals by Masimba Mambare and second half substitute Tawanda Macheke.
Mutuma profited from a rebound after Bret Amidu’s initial effort was blocked by keeper Jorum Muchambo to put Dynamos in front with a composed tap in on nine minutes.
Caps United continued to play second fiddle but Simba Nhivi came close on 33 minutes only for his effort to be saved by impressive goalkeeper Ashley Reyners after pouncing on a rebound when Tafadzwa Rusike’s effort crashed against the post.
Dynamos doubled their lead in the second half with Mambare chipping the ball over the goal keeper on 59 minutes following a set up by Amidu.
But Caps United coach Lloyd Chitembwe, missing the services of leading top goal scorer Leonard Tsipa, responded by pulling out Amidu-replacing him with Amon Kambanje while Kudzanai Nyamupfukudza came in for Devon Chafa on 71 minutes.
Barely two minutes after the changes, Macheke popped up with the third, a simple tap in from a cross by Mambare to silence the Caps United faithful.
Dynamos finished the match however without their assistant coach Murape Murape who was sent off by Harare referee Ruzive Ruzive for the gestures he made at the Caps United technical bench.
To their credit, the Green Machine, like serious championship contenders, soaked all the pressure to claw back into the game. When Chitembwe introduced Moses Muchenje on 80 minutes, in a desperate bid to get a consolation, the game turned on its head.
Lloyd Mutasa also made some changes, pulling out Stephen Alimenda, replacing him with Wisdom Mutasa with Valentine Ndaba also coming in for Takunda Sadiki.  Barely six minutes after the change, towering Caps United defender, Dennis Dauda, headed home a rebound from a Dominic Chungwa’s effort to reduce the arrears.
Kambanje then added the second- heading home at the back post on 88 minutes before Dauda leapt highest to plant a firm header into the nets off a well taken corner kick by Ronald Pfumbidzai for a share of the spoils.  At this point, the Green Machine were all over their opponents , launching wave after wave of attack on their opponents’ goal and came close to sew up the contest in referee’s optional time but Pfumbidzai missed a headed opportunity.Advertisement

As the referee blew to end the match, there was a mass of celebrating bodies on the pitch including club president Farai Jere who congratulated his team for a job well done.
Chitembwe, though, said his charges were poor for the better part of the match but was happy with the point gained.
“We were very poor for the entire part of the match. We didn’t come to the party until the last 15 minutes of the match. I thought we were overawed by the occasion. Before the match I had told the players we didn’t need to play the occasion but unfortunately we appeared to play the occasion but I, naturally, am happy with the point but the gloss has been taken off by the first half performance,” said Chitembwe.
His counterpart, Mutasa, looked dejected and down cast after the match. He blamed his charges for not playing according to instructions.
“As a coach I am really disappointed with some of the players. We conceded silly goals. I had told them to mark at the blind post but they didn’t follow the instructions. As a coach can you go and play?,” said a dejected Mutasa.