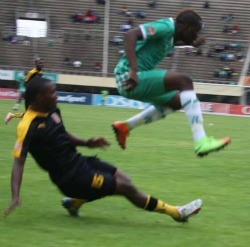 CHAMPIONS Caps United played to a 1-all draw with relegation threatened Hwange FC while inconsistent Highlanders walloped Black Rhinos by 2 goals to nil in some of the highlights of Week 30 of the 2017 Castle Lager Premier Soccer League round of matches played on Sunday.
Chicken Inn, another title hopeful lying fourth on the premiership ladder, failed to narrow the gap separating it with the leaders when they played to a goalless draw away to Sunday Chidzambwa’s ZPC Kariba at Nyamhunga Stadium, Kariba.
In the match played at the National Sports Stadium, Caps United found themselves trailing as early as 33 minutes of play when Derick Murimba struck for the visitors.
But Hwange’s celebrations were short-lived as the hosts were quick to restore parity only two minutes later through John Zhuwao
Caps created more chances than the visitors but were failed by poor marksmanship.
The Green Machine remains on position five with 50 points amassed in 30 matches while Hwange are third from the bottom with 31 points.
In Bulawayo, Highlanders avenged their 0-3 defeat to Black Rhinos in their reverse fixture in Harare earlier in the year when they beat the army side through goals by tough defender Peter Muduwa and exciting linkman King Nadolo with both goals scored in the second half.
The former champions remain position seven with 43 points to their name.
In other matches played, struggling Shabanie Mine saw their 1 goal lead cancelled by Triangle FC with only a minute left of play to end the Maglas Stadium match in a 1-all draw.
In Beitbridge, premiership minnows Tsholotsho FC and Bantu Rovers also played to a 1-all draw. Bantu Rovers are already relegated while Tsholotsho are battling for survival.
On Saturday, Dynamos were 0-2 losers to log leaders Ngezi Platinum in a match marred by both crowd trouble and bad weather.
Bulawayo City were 1-3 losers to Air Force side Chapungu FC while Prophet Walter Magaya’s side failed to find a miracle to avoid a 1-nil beating by How Mine.
Advertisement