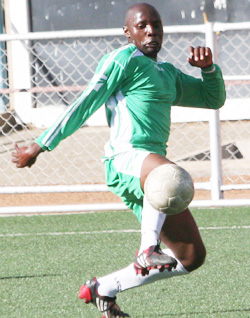 CAPS United has cut the lead over leaders FC Platinum to one point after beating a battling Triangle at Gibbo Stadium on Sunday.
With FC Platinum stuttering again to a 1-1 draw against ZPC Kariba on Saturday, the Green Machine were the major beneficiaries of that stumble.
A first half goal by veteran striker Leonard Tsipa and another- five minutes from full time by Kudzai Nyamupfukudza sealed victory for the Harare giants.
The win took their points tally to 43, one behind leaders FC Platinum. The Harare giants dominated the first half in which they carved out good chances.
It was a matter of when, rather than if they would score, and it didn’t really surprise when Tsipa had his name on the score sheet on 37minutes, profiting from Donald Dzvinyai’s defensive error.  It was Tsipa’s seventh goal of the campaign and is now one goal shy of leading top goal scorer- Hwange striker Gift Mbweti.
After the goal, Triangle moved a gear up but could not breach a disciplined Caps United defence as they lacked imagination in the final third.
They, however, came back the better side after the break.
And they levelled matters on 59 minutes with Nelson Maziwisa planting a firm header into the nets after goalkeeper Edmore Sibanda palmed the ball into his path.
The visitors, however, kept their composure and five minutes from full time, Nyamufukudza beat goalkeeper Tapiwa Chilenga for the insurance goal.
The result compounded misery on David Mandigora’s Triangle as they have lost their last three matches of the campaign.
The Triangle gaffer said they conceded silly goals.
“This is football; sometimes you win, sometimes you lose. Today it was a bad day in office for us, we made mistakes in defence. We wanted to win so we tried our best but it failed,” Mandogora said.
Lloyd Chitembwe applauded his team.
“I thought it was a very good game especially in the first half but this is the game of football we can’t dominate for 90 minutes. We went on to dominate in the second half but eventually l am happy with the result.  This is all what this team is about, the character,” Chitembwe said.
Teams:
Caps United
E Sibanda, H Zvirekwi , R Pfumbidzai , S Makatuka , D Dauda,  D Chafa,  M, Muchenje, Amidu Brian Abbas (34′ Archford Gutu ), J Ngodzo Joel, S Nhivi , L Tsipa(89’ Munzabwa Carlton) Advertisement