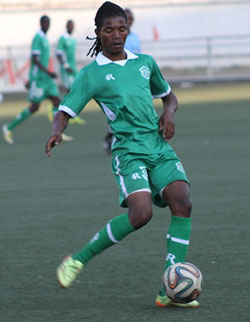 CAPS United skipper Tapiwa Khumbuyani says they are not underestimating under-pressure Highlanders and will not seek revenge when the two giants square up at the National Sports Stadium on Sunday in the Castle Premiership race.
Bosso have lost their last two matches against Harare City (1-0) and ZPC Kariba(3-1), which led to the departure of coach Kelvin Kaindu and are looking to avoid a third successive loss. Mark Mathe is now in charge of Highlanders until the end of the season.
On the other hand, Caps beat Black Rhinos 1-0 in their last outing to move into third place with 42 points, three ahead of Highlanders.
The Bulawayo giants have also been rocked by cases of indiscipline in the last two months from both players and the fans.
Khumbuyani spoke to New Zimbabwe.com on the side-lines of his side’s launch of a mobile application for team news on Thursday.
“It is going to be a tough match. Highlanders might be under pressure but they always play well against us and we cannot be complacent. We need to be focused and played to our best.
“Remember last time they beat us 4-0 at Barbourfields and I think looking for revenge will only put us under pressure. So we will play our normal game.
“I think everybody is ready for this match and will give it their best. We have been working hard in the last two weeks for this game and we are ready,” Khumbuyani said.
“If we win, we will be six points ahead of Highlanders and that way we can finish in the top four and maybe even with the league title.
“Anything can happen in football so while we play our normal game, we need to keep our form and win this match.”
He made a special appeal to the fans. “I am appealing to the fans to come in their numbers to support us and accept whatever result from the match.”
Caps have been found on the wrong side of the law after their fans threw missiles in the 0-0 draws against Bantu Rovers and How Mine, which has cost the club $4,000 fines.
Similarly, Highlanders face a $2,000 fine for the violence that rocked their league match against ZPC Kariba at Hartsfield.
Ironically, it was Mathe who engineered that famous 4-0 win at BF when Kaindu was in the UK for his studies and will be seeking to complete a double that will keep them in the title race and a spot in the Mbada Diamonds Cup.Advertisement