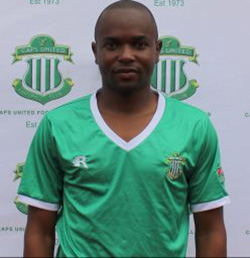 CAPS United have severed ties with midfielder Tafadzwa “Fire” Rusike amid reports a misunderstanding over the acquisition of a vehicle.
Rusike is alleged to have misrepresented to management and allegedly bought a car that was four times the value he had agreed with the club.
Reports on Monday suggested that Rusike’s contract was terminated on the eve of the Harare derby against Dynamos, which Caps won 1-0.
Club chief executive Cuthbert Chitima could not be reached for comment but Rusike maintained his innocence over the allegations.
“I am surprised to hear this. I was not called to explain my position, so I can’t say much,” said Rusike.
He continued; “I have great respect for the president (Jere) and will remain loyal to Caps United. I have been with them since I have been very young.
“Caps United is my home, it’s the team that groomed me into the player that I am today. I feel indebted to them.
“Sometimes I have played while am not fully fit, because I love the team, but if they have made a decision there is nothing I can do. I will have to move on with my life.”
Before the weekend game, Rusike had missed three games for Caps United after picking up an injury during the Harare derby against Dynamos which they lost 0-2.