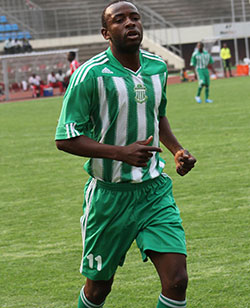 CAPS United 2-1 Chicken Inn
CAPS United put behind a turbulent week to progress to the semi-finals of the Mbada Diamonds Cup on Saturday when they beat Chicken Inn 2-1 at Ascot Stadium in Gweru.
David Rediyoni and Tawanda Nyamandwe scored the all-important goals for the Green Machine while Brian Mbiriri scored Chicken Inn’s face saver.
Mbiriri could have sent the game into the dreaded penalty lottery but shot against the bar five minutes from time.
Last Sunday, Caps coach Taurai Mangwiro had quit the Harare side after a 3-1 thrashing by Shabanie Mine before making a sensational return on Tuesday after peace talks with club owner Twine Phiri.
United were clearly in need of the financial rewards from the match and are now guaranteed US$45,000 while Chicken Inn will get US$30,000 for reaching the last eight.
Phiri travelled with the team to Gweru to cheer them up and got the perfect response in front of a full house.
Caps will now join Harare City, who beat Hwange 2-0 at Dulibadzimu on Saturday in next Friday’s semi-final draw.
Highlanders take on Buffaloes on Sunday at Mucheke in a game that will be televised on
Supersport while defending champions Dynamos have an easy home tie against How Mine at Rufaro.