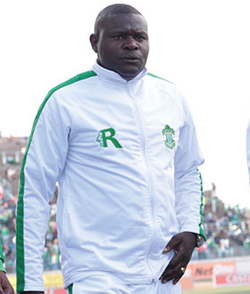 CAPS United coach Lloyd Chitembwe feels last Saturday’s exit from the Chibuku Super Cup could be a blessing in disguise as it will allow them to fully focus on their league title bid as they resume their campaign away at ZPC Kariba on Wednesday.
United were booted out of the Chibuku Super Cup by struggling ZPC Kariba 5-4, on penalty shootouts following a 1-1 regulation time draw.
It was an embarrassment for the Harare giants, who had hoped to reclaim their Cup Kings status by bagging the Chibuku Super Cup, which also comes with a ticket to participate in the Caf Confederations Cup next season.
Now they fully channel attention to break an 11-year league title jinx.
Winning the league title is a realistic quest for United as just a point separate them, with leaders FC Platinum.
“Just like any other team in the league we had wanted to do well in the Chibuku Cup. But there are factors that prevented us and it was beyond our control,” Chitembwe said.
“We play to do well in every competition. Now we are left with the league title and we have better chances there, just like FC Platinum and Highlanders. We will give it our best shot. Maybe now we can put all our energy on the league title. We hope it works well for us.”
The trip to Kariba is however a tricky one as ZPC Kariba are an unpredictable outfit.
Caps welcome back veteran striker Leonard Tsipa, who was rested for the Tsholotsho match. Tsipa currently shares the place on top of the league’s top scoring chart with Hwange’s Gift Mbweti each with eight goals