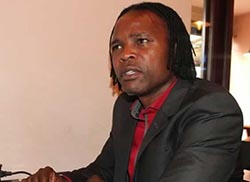 CAPS United have dumped Spanish Sportswear manufacturer Joma who were their technical sponsor in favour of Roar which is owned by one of the club’s directors Tutisanhi Nhamo.
The club’s board member in charge of marketing, Alois Bunjira announced on Monday that Roar had taken over as the club’s official technical sponsor.
“The position is that Roar has taken over as Caps United’s new technical sponsor from Joma. It is a shareholder decision and one of the club directors owns Roar,” Bunjira said.
The development follows the decision by the Green Machine hierarchy to terminate the contract with Joma which was running up until March.
The Green Machine used the kit from Roar in the 2014 season.
Last season they were kitted by Joma before deciding to engage a new technical sponsor this campaign.
Highlanders and Dynamos, dressed by Germany sportswear manufacturer Adidas, are the only other two teams in the Premiership with technical sponsors.
Joma, who also dress the Warriors, are understood to be targeting going into bed with Caps United rivals Dynamos and Highlanders.
The Green Machine have said they will take their pre-season tour to South Africa where they are scheduled to play friendly matches against South African Premiership giants Mamelodi Sundowns and Bidvest Wits.
The Harare giants, who finished in fifth position under Lloyd Chitembwe after he took over towards the end of last season’s campaign, have declared they will be fighting for honours this term.Advertisement