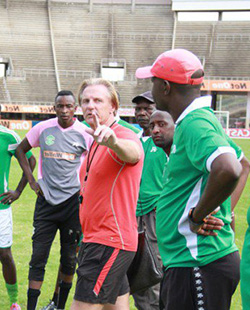 CAPS United English coach Mark Harrison faces eviction from his Borrowdale apartment after the club failed to pay his rentals.
The Caps United coach has since been given a notice of eviction by his landlord if he fails to pay up by Wednesday.
Harrison said Tuesday he was now in a desperate situation as the financial problems at Caps United deepen.
“I was told by my landlord I should look for money to pay up or face eviction,” said the coach.
“I am two months behind in payment of rentals. I am in a very difficult situation and I don’t know what to do.
“My wife is now down with depression. I was supposed to attend their meeting but I failed because I was attending to my wife.
“Things are really bad I have got nowhere to go. The most difficult thing is that I am a foreigner, I need help.”
Players and members of the technical team are owed salaries and on Sunday, the team had to arrive in Mutare for their match against Buffaloes in batches after some senior players initially refused to make the trip.
Caps also boycotted their league match against How Mine and were fined by the PSL.
In 2010 the club also had their Northern Irish coach Sean Connor, evicted from his lodge after also failing to pay his rentals.
FIXTURES
Friday: Tsholotsho v Dongo Sawmill (White City Stadium)
Saturday: Chicken Inn v Highlanders (Barbourfields Stadium), Harare City v Hwange (Rufaro Stadium), Flame Lily v Buffaloes (Lafarge Stadium), FC Platinum v Triangle United (Mandava Stadium), Whawha v ZPC Kariba (Ascot Stadium)
Sunday: How Mine v Dynamos (Barbourfields Stadium), Caps United v Chapungu (National Sports Stadium)