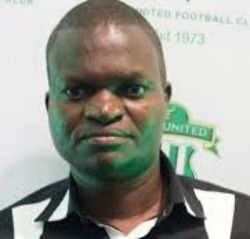 CAPS United have condemned violence in football following the abandonment of  their Chibuku Super Cup against Shabanie Mine at Maglas Stadium on Sunday.
The match was abandoned after 65 minutes with the home team leading 1-0 through a header by defender William Mapfumo after assistant referee Thomas Kusosa was hit by a missile from a bay housing the visitors’ supporters in what was thought to be a protest after the assistant referee flagged for offside a goal by Caps United’s Kudzai Nyamupfukudza.
Philani Ncube, the man at the center, decided to call of the match after consultation with match commissioner Gladmore Muzambi.
The two teams are now set to appear before the PSL Disciplinary Committee. Caps United chief executive Cuthbert Chitima said acts of hooliganism were costly to the club.
According to the rules and regulations governing the tournament if a match is abandoned, the matter shall be referred to the Disciplinary Committee who shall impose a fine of not less than $2000 on the guilty team.
The match result is awarded to the opposing team on a 3-0 winning score line or more if the opposing team has already reached a higher score.
“As Caps United we would like to categorically state that we do not in any way tolerate acts of hooliganism and violence before, during and after matches. Such embarrassing and life threatening disturbances should be condemned in the strongest terms.
In regard to the ugly scenes that transpired at Maglas Stadium on Sunday, the board member responsible for our supporters has been assigned to conduct investigations and fans who will be caught on the wrong side of the law will be brought to book. We also appeal to law enforcement agents to assist us in apprehending the culprits. Pitch invasion and missile throwing should never be allowed near football activities as it costs the club huge sums of money.”
The PSL has also made it clear they did not condone violence and urged all football leaders to educate their fans on the dangers of violence and hooliganism.
Chicken Inn, who were found guilty of causing the abandonment of their match against Yadah FC, were fined and banned from the tournament next year while their opponents were given the match on a 3-0 score line.Advertisement