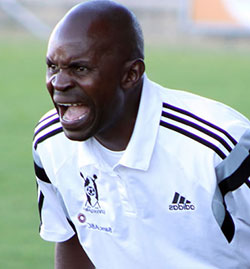 FORMER former Highlanders coach Mark Mathe has been appointed assistant coach at premiership rivals Caps United.
“Mathe is confirmed as one of the assistant coaches,” Caps chief executive Joe Makuvire said Wednesday.
“Mark Harrison, the football manager will make adjustments to the technical team. That is the official position.”
The former Bosso coach has been in Harare attending Caps United training sessions, raising speculation he was in line for appointment as assistant coach.
Initially the United management would not confirm Mathe had been offered the job, only saying he was one of the candidates.
At a press conference held in Harare last week Makuvire only said they had a vacancy for an assistant coach.
Mathe was Highlanders coach last season but was later fired following a run of dreadful results.
Englishman Mark Harrison is the football manager while Brenna Msiska and Fungai “Tostao” Kwashi are the other two assistants.Advertisement