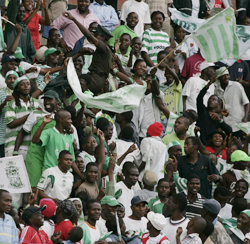 Highlanders 0-1 Caps United
FOR all their in-house problems, Caps United managed to put up a scintillating performance as they edged Highlanders 1-0 at Barbourfields Stadium on Sunday for their third win in the 2015 Castle Lager Premier Soccer League season.
A 26th minute strike by Steven Makatuka from a well taken Gerald Phiri corner kick was enough for the Green Machine to head back to Harare smiling. With the win, Caps moved into the fifth place with 11 points from seven starts while Bosso dropped to seventh place.
An elated Caps coach Mark Harrison said his players deserved victory.
“We could have been 3-0 or 4-0 up by halftime, we had all the chances that we did not put away in the first half but at least we got the three points.
“What I can say, the play, passing and attacking was good and this is a marvelous bunch of players I have here and the support from the fans is amazing, really amazing,” Harrison said at the end of the match.
True, Rodreck Mutuma had chances inside the box but fluffed his lines twice as the Bosso defence struggled to clear in the opening 20 minutes.
Takudzwa Mahori’s first time left stinger from the edge of the box was parried away for a corner by keeper Ariel Sibanda after right back Webster Chingodza was caught napping.
As the second half began, Mutuma benefited from yet another piece of shambolic defending by captain Felix Chindungwe and Bruce Kangwa but saw his effort saved by Sibanda in a one on one situation.
Bosso threw more men forward with Simon Munawa and substitute Thomas Chideu coming close, but the equaliser would not just come. Coach Bongani Mafu said his players were lacking confidence.
“We tried all we could but the goals are not coming. Maybe when we score, the confidence will come. We just have to go back to the drawing board and work on that. But this is not pleasing at all coming on the back of another home loss,” Mafu said.
This was Highlanders’ second loss at home in a row after they lost to Chapungu 1-0 three weeks ago and fans were miffed.
Immediately after Sunday’s loss, the fans barricaded the VIP enclosure and threw stones while demanding an explanation from Mafu and his players, but the anti-riot police quickly dispersed them.
Caps are under threat of liquidation due to debts owed to former board members Lewis Uriri and Nhamo Tutisani while shareholder Farai Jere has stayed away from the club for unknown reasons.Advertisement