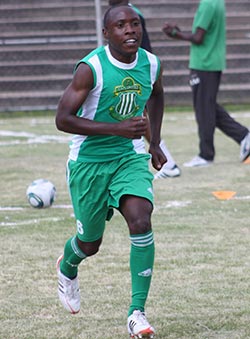 GIANTS CAPS United and Dynamos face off in the long awaited Harare derby at the National Sports Stadium Sunday with the Green Machine a severely depleted side with their chief striker Dominic Chungwa suspended for accumulating yellow cards in previous matches.
Chungwa has been suspended for accumulating three yellow cards in previous matches against Harare City, Chicken Inn and against Chapungu at the weekend.
He is one of the top goal scorers in the premiership with eight goals. Without him, coach Lloyd Chitembwe, will have to call upon John Zhuwawo and Nigerian international striker Abasirim Chidiebere to lead the attack.
They, however, have captain Hardlife Zvirekwi who returns from suspension after missing the trip to Chapungu last week where the Green Machine were held to a goalless draw by the air men.
But the Green Machine will still be without defender Justice Jangano who is still serving suspension after he was given a second booking in their victory over army side Black Rhinos at the National Sports Stadium last week.
Caps United go into the match seeking to maintain their dominance over Dynamos after they defeated them 1-0 last season with the reverse fixture- a six goal thriller, ending in a 3-3 stalemate.
Both teams go into the match at a time they are in top form with Caps United managing 11 points in the past five matches out of a possible 15 while their rivals have collected all 15 points in the past five games.
Advertisement