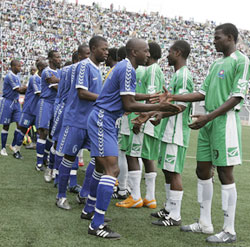 FOR the third time in a month, Dynamos and Caps United will clash at Rufaro Stadium, this time in the semi-finals of the ZNA Charity Shield.
Dynamos and Caps were handpicked for the Sino-Zim Cement Cup which Caps won 6-5 on penalties before Sunday’s Bob91 Super Cup final in which Dembare triumphed 1-0.
The two Harare giants will clash again in the Castle Lager Premier Soccer League in Week Four when the new season finally kicks off on March 21.
Last year’s winners FC Platinum, who beat Caps United 6-1 in the final at Mandava, were not considered for the competition as they are travelling to Tanzania this Friday for the Caf Confederation Cup first leg, first round tie against Young Africans.
In the other semi-final, Highlanders and How Mine will clash at Barbourfields Stadium, with the final set for a later date.
Proceeds from the three matches will be channelled towards the various army charities spread across the country.
Fixtures
Sunday: Dynamos vs Caps United, Highlanders vs How MineAdvertisement