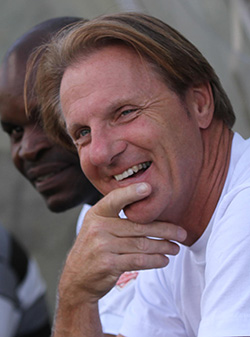 CAPS United host a limping FC Platinum on Sunday at the National Sports Stadium hoping to make it two wins from two matches in the Castle Lager Premiership.
Platinum were due to play Young Africans of Tanzania in the second leg, first round of the Caf Confederation Cup this weekend, but the inter-club games were postponed across the continent after Caf re-jigged the fixtures.
Caps started the season with a 2-1 away win against newly promoted Hwahwa in Gweru last week after Rodreck Mutuma’s double while Platinum were held at home to a 2-2 draw by new boys Dongo Sawmills.
But the two teams have always produced a good game of football in their past battles, with Platinum beating Caps 2-0 in the first match last season while picking up a draw in a 0-0 battle in the return fixture at the NSS.
Being winless in their last two matches against Platinum and having a new coach in Mark Harrison, means Caps might be expecting better fortunes this time around.
On the other hand, the Norman Mapeza-coached Platinum have found the going tough in their last two matches, losing 5-1 to Young Africans in the Caf Confederation Cup before the draw in the opening week of the Castle Premiership.
In other matches, Buffaloes will have to play its first ‘home’ match away from home as the Zifa grounds committee has condemned Sakubva.
The army side will now host Triangle at Vhengere Stadium in Rusape-94 km away from Mutare.
On Sunday, the same stadium will see Dongo playing host to How Mine.
Harare City will seek to bounce back from last week’s surprise 1-0 defeat to Tsholotsho when they play Chicken Inn at Rufaro on Saturday.
But Chicken Inn had a good start, winning 2-1 against Flame Lily in their season opener and would want to maintain the momentum early in the season.
The new boys, Flame Lily and Hwahwa, clash at Gwanzura on Saturday.
Hwange, fresh from a 5-2 drubbing by Triangle, host ZPC Kariba at the Colliery hoping to get their first set of maximum points.
ZPC beat Highlanders 2-0 last week.
FIXTURES
Saturday: Harare City v Chicken Inn FC (Rufaro), Flame Lily v Whawha (Gwanzura), Chapungu vDynamos (Ascot), Buffaloes v Triangle (Vengere)
Sunday: Dongo Sawmill v How Mine (Vengere), Caps United vs FC Platinum (NSS), Tsholotsho FC v Highlanders (Barbourfields), Hwange v ZPC Kariba (Colliery)Advertisement