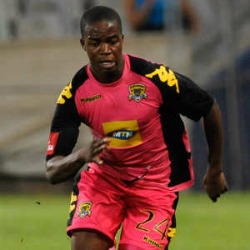 CAPS United midfielder, Abbas Amidu, has, according to the club’s website, been invited for a one week trial stint with a Germany lower division club SSv Ulm 1846 fussball.
“Abbas Amidu has been invited for trials next week in German with second division club SSv Ulm 1846 fussball. The club would like to wish him well during his trial period,” they said on their website.
Ulm are enjoying their place at the top of the log with 63 points from 29 matches while second placed Nottingen are on 61 points from the same number of matches.
Amidu signed a one-year deal for Caps United at the beginning of the season after making a return to the local Premiership after four years playing outside the country. He had been earmarked to join rivals Dynamos but Caps United beat them to his signature.
He left the country in 2012 to join South African giants, Kaizer Chiefs, before he was released to Black Leopards.
Last year, Amidu then joined United Arab Emirates Division One club, Masafi, on a two-year contract.Advertisement