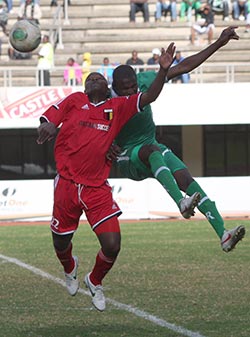 Caps United 1-0 Bantu Rovers
CAPS United forward Dominic Chungwa scored the only goal that counted for the Harare giants to see off Bantu Rovers in a Castle Lager Premiership tie at the National Sports Stadium on Sunday.
After a shocking 2-0 defeat to How Mine in their previous match, Caps United were desperate for a win.
And they had Dominic Chungwa to thank when he thrust them into the lead after 10 minutes when he met a cross by Hardlife Zvirekwi from the right to drill the ball past goalkeeper Brighton Chipula.
Despite United getting an early goal, Bantu Rovers recovered to launch a series of raids on United goal with Fortune Ncube coming close on 16 minutes only to direct his effort wide.
Obadiah Tarumbwa also missed a headed opportunity on 22 minutes as Caps defender Stephen Makatuka cleared the ball out of the danger zone.
Four minutes later Tafadzwa Kutinyu missed from three yards after a well delivered long throw in into the penalty area by Emberton Tshuma.
Caps United also missed a good opportunity on 33 minutes with Leonard Fiyado failing to connect a cross from Zvirekwi. At the stroke of the first half, Chungwa had his shot blocked by defender Zephania Ngodzo.