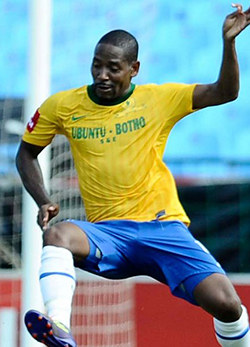 CAPS United unveiled six new players including former Mamelodi Sundowns defender Method Mwanjali and Oscar Machapa at Harare Sports Club on Thursday.
The Harare giants have also signed two foreign based players, Equatorial Guinea midfielder Antonio Fugo formerly with Deportivo Mongomo and Zambian defender Michael Mwenya who was playing for Lime Hotspurs in his home country.
Zimbabwe Under-23 defender Justice Jangano joins from Division One side Gunners and was also introduced alongside Harare City forward Phineas Bhamusi who has however played for the Green Machine already.
The 23-year-old Fugo said he was happy to play for Caps United. He said he was in Zimbabwe as a student.
“I am here as a student on scholarship and being a soccer player I am happy to join Caps United. It’s a good experience for me to play for Caps United,” Fugo told reporters.
“I have been playing for Deportivo Mongomo in the premier league back home for the past two years. All along I have been playing in the lower divisions and I hope to do well for Caps United.”
United board members Lewis Uriri who is the chairman, Alois Bunjira (marketing), Modecai Sachikwenya (technical), Abraham Kawadza (supporters) and club president Farai Jere also attended the unveiling ceremony.
Machapa said he opted for Caps United as Dynamos had not approached him despite his contract coming to an end.
“Caps United have been following me up and when they realized my contract was coming to an end, they grabbed the opportunity and offered me a deal.
“So I have come where I was wanted and hope to do well,” said Machapa.
Mwanjali said he has a role to play at Caps United.
“With the experience I have gained, I have a role to play at Caps United. I will help guide the younger players,” said Mwanjali.
Caps United face Harare City in the reverse fixture at the National Sports Stadium on Sunday.
WEEKEND FIXTURES
Saturday: Flame Lily v Tsholotsho (Lafarge), ZPC Kariba v Triangle (Nyamhunga), Chapungu v WhaWha (Ascot 1400hrs SS)
Sunday: Dongo Sawmill v Chicken Inn (Vengere), Hwange v How Mine (Colliery), Highlanders v Dynamos (BF 1500hrs SS), Buffaloes v FC Platinum (Sakubva), Caps United v Harare City (NSS)Advertisement