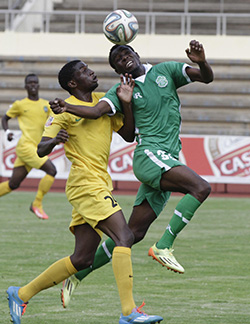 CAPS United drew 0-0 with FC Platinum at the National Sports Stadium on Wednesday to allow league leaders Dynamos to go seven points ahead of them.
On an afternoon where Taurai Mangwiro’s forwards fruitlessly toiled, United dropped two crucial points to extend the gap between them and Dynamos from five to seven points.
Dynamos beat Harare City 5-3 on the same afternoon.
FC Platinum returned home with a point gained but slid one place down to fifth position.
It was a drab affair that saw the sides rarely creating anxious moments for each other.

The first real chance of the afternoon came 15 minutes into the match with FC Platinum defender Gift Bello having his header crucially saved by Caps goalkeeper Tafadzwa Dube after Elvis Moyo had sent in a perfect cross.
United responded twelve minutes later through Ronald Pfumbidzai whose shot crashed on the cross bar.
FC Platinum thought they had won a penalty when forward Obey Chirwa was hacked down just inside the box by Caps defender George Nyirenda but the referee instead booked the Zambian striker was booked for diving.
In injury time, it was Caps’ chance to demand a penalty after Raphael Muduviwa appeared to have handled Pfumbidzai’s cross inside the box.
But the referee waved play-on to cap an afternoon of few chances.