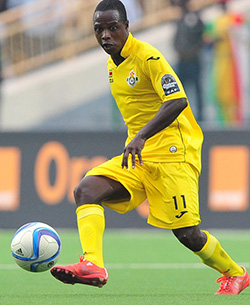 CAPS United warmed up to their African Champions League clash against Al Ahly Tripoli next week with a 3-0 demolition of Bantu Rovers in a Castle Lager Premiership tie at the National Sports Stadium on Tuesday night.
After a slow start in the first half in which Caps United struggled for fluency with Dominic Chungwa guilty of missing several opportunities, they came back into the second half with the determination of a bee and the spirit of an ant.
And it was the usual suspect Ronald ‘Rooney’ Chitiyo who broke 46 minutes of resistance by Bantu Rovers, picking the ball from 25 yards, before unleashing a thunderous shot that troubled goalkeeper Nyasha Shadreck who had the night mare of retrieving the ball three times from the nets.
The goal sent Caps United fans into delirium.
Chungwa, then made amends on 52 minutes, collecting a pass near the penalty area before hitting the roof of the nets to double the lead.
And as the goals appeared to deflate Bantu Rovers with their skipper Bukhosi Sibanda seemingly fighting a lone battle, Caps United grew in confidence.
Lloyd Chitembwe then pulled off Abbas Amidu and introduced Amon Kambanje on 54 minutes. United began to bombard their opponents goal with an assortment of shots and Chitiyo came close on 64 minutes but his shot from an acute angle was by parried away by the goal keeper.
And on 69 minutes, Kambanje profited from a horrendous mistake by a Bantu Rovers defender who set him up as he attempted to pass to his team mate.
The Caps United striker accepted the neatly wrapped gift, lobbing the ball over a drawn-out goalkeeper to sew up the tie.
It was a deserved victory and assistant coach Fungai Tostao Kwashi was pleased with the result.
“Good performance three goals, three points, we are happy. Brilliant goal for Rooney, contender for goal of the season from Kambanje.
“I know it’s too early to talk about that but it was a fantastic goal from about 40 yards to know that the keeper is not there,” said Kwashi.