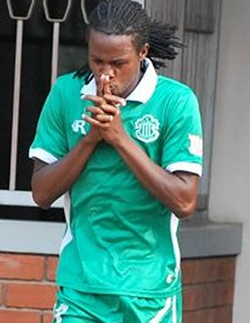 CAPS United midfielder and Soccer Star of the Year finalist Tendai Samanja is set to swap the green colours of the Harare side for the green of FC Platinum as he leads an exodus following the departure of coach Taurai Mangwiro.
Mangwiro is now the head coach at Harare City having been unveiled on Wednesday.
Samanja confirmed that he will not be returning to Caps United next season.
“No I won’t be at Caps next season. I will tell you later,” he said.
It is understood though that Samanja has already been offered a lucrative three year deal by Norman Mapeza at Platinum is set to be named in the 25-man squad that will be unveiled by the Zvishavane-based side on December 15.
December 15 is the deadline for the registration of players for the Caf inter-club competitions and next year Platinum will be Zimbabwe’s only representative in the Africa, playing in the Confederation Cup, their second journey into the African jungles after playing in the Champions League in 2012.
Samanja is not the only one in the departure lounge at Caps; goalkeeper Tafadzwa Dube and striker Dominic Chungwa have been linked with bitter  city rivals Dynamos, who are also on the search for a coach after the departure of Kalisto Pasuwa.
Captain Tapuwa Khumbuyani and the highly rated Kelvin Bulaji also want out of the Green Machine side that struggled for finances in the past season but still managed to finish in third position and qualified for the 2015 season opening Mbada Diamonds Cup.
Caps spokesperson Joyce Kapota says they are not in a hurry to get a coach but will make sure they get the best for the next season and on a long term deal. She said the issue of p-layers will be handled by the incoming coach.
“The new coach knows the players he will want. We don’t want to buy or release players before we get a new coach but for those whose contracts expire at the end of the year, we will have to negotiate with them,” she said.
Dynamos, on the other hand, have advertised for the post that will fall vacant on December 13 when Pasuwa leaves, but have demanded a Caf A licence or better for any prospective coach.Advertisement