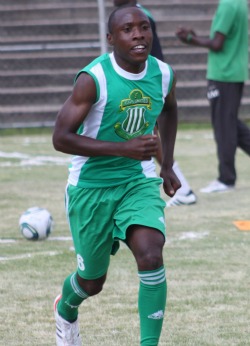 CAPS Utd 2-1 Triangle
CAPS United returned to their National Sports Stadium with a 2-1 victory over Triangle in a Castle Lager Premier Soccer League match at the National Sports Stadium on Thursday.
It was a sweet victory for the Green Machine as bitter rivals Dynamos were shocked 1-0 by premiership new boys Chapungu at Ascot Stadium.
Caps United have been using Gwanzura Stadium as their home ground in previous matches in which they dropped crucial points.
Their new signing from Malawi Ishmael Thindwa played the entire match but it skipper Tapiwa Khumbuyani and Ronald Pfumbidza who the goals they desperately needed to collect maximum points.
Khumbuyani got to the end of a well taken corner kick by Gerald Phiri and rose highest to head the ball into the nets.
However, Triangle now under the guidance of Big Zuze, refused to be cowed into submission as they took control in this first half and every attack they made looking very dangerous.
Midway through the first half, Brian Juwayeyi came close but his rising shot was tipped over by Caps United goalkeeper Tafadzwa Dube.
The visitors hit back almost immediately when Tinei Chitora was allowed a free header in the danger zone to cancel Caps United’s lead.
Caps United however, regrouped in the second half, with Dominic Mukandi making way for Gerald Phiri and centre back Stephen Matuka came close but Triangle defender Ronald Maketo raced to clear the lines.
Substitute Mukandi then watched in disappointment as his effort crashed against the upright post following a good set up by Hardlife Zvirekwi.
Leftback Ronald Pfumbidzai then decided the contest with a stunning free kick on the edge of the area which beat goalkeeper Ronald Mudimu and nestled into the far left corner of the post.
Caps United coach Taurai Mangwiro was happy to win at the National Sports Stadium, having dropped points in their previous matches played at Gwanzura.
“We have been dropping points but on our return to the National Sports Stadium we collected maximum points,” he said.
“We were playing a team which has a type of play almost similar to ours. We had a scare but we managed to rescue the match. It was a game of two halves, they dominated the first half but we reorganized in the second half and took control.Advertisement

“It could have been three goals with a little bit of luck. We now go into the match against Highlanders with confidence high.”
The Caps United gaffer also praised his new signing Thindwa.
“Expectations were high but he had a decent game in his first match. He will improve with each game,” said Mangwiro
Zuze praised his charges for their brave show.
“We are happy with the outcome. Caps are a big team but we matched them. I think we handled
the match very well,” he said.
“We have youngsters in the team and they did well. They managed to adjust to the playing surface which I think is too bad. I hope they show the same attitude in our next match.”
RESULTS
Thursday: Chapungu 1-0 Dynamos, Chicken Inn 1-1 Highlanders, Hwange 1-0 Black Rhinos, Caps United 2-1 Triangle
Wednesday: Harare City 0-1 Buffaloes, Chiredzi 1- 2 How Mine, Shabanie Mine 1-0 Bantu Rovers, ZPC Kariba 0-0 FC Platinum