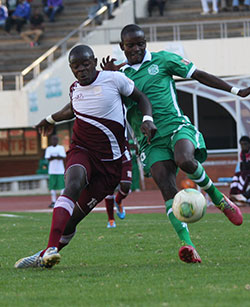 Caps United 3-0 Shabanie Mine
CAPS United continued with their fine home form after dismissing visiting Shabanie Mine 3-0 at the National Sports Stadium on Sunday.
Pervington Zimunya punished his former paymasters with a 12th minute opener while Ronald Pfumbidzai doubled the lead before a Gerald Phiri injury time strike sealed a convincing victory for the Harare giants.
United are yet to lose a match at home this season, while for Shabanie Mine it was a continuation of a poor away run.
Zimunya opened the rout with a fine curler as Caps dominated play but two minutes after his goal, he failed to connect a Phiri cross.
Dominic Chungwa’s low shot narrowly missed target on 24 minutes.
It took 28 minutes for Shabanie Mine to attempt at goal for the first time when Zvikomborero Bizeki shot just over the bar.
Zimunya attempted a repeat of his goal but his curler was this time punched out by Shabanie’s returning goalkeeper Victor Twaliki.
Shabanie began persisting with Daniel Chakupe being denied by the goal post as Bizeki and Ashley Mukwena also took shots at target just before halftime.
Not much action after the restart but two goals came with Pfumbidzai converting a penalty after Twaliki fouled substitute Godknows Mangani inside the box.
Two minutes into injury time, Phiri killed the match as a contest after pouncing on a rebound of Chungwa’s shot that had been punched into play by Twaliki.