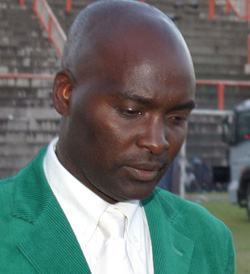 THE two year ownership struggle at Premier Soccer League club Caps United finally ended on Monday.
The dispute ended after majority ownership Twine Phiri and Farai Jere reached an agreement over missing share certificates.
Jere returned to Caps with his 25 percent shareholding with Phiri retaining 75 percent.
Jere quit in November 2012 after Caps had been beaten 3-2 by Hwange and Irish coach Sean Connor fired.
After that defeat Jere claimed that his share certificates had disappeared from a Harare lawyer’s offices.
The Harare businessman, who is also now into the hospitality industry, took two years off until his official return on April 13, which was confirmed by a statement from the Caps board.
The board has Harare advocate Lewis Uriri, Nhamo Tutisani, Alex Munyaka and Mordecai Sachikonye.Advertisement