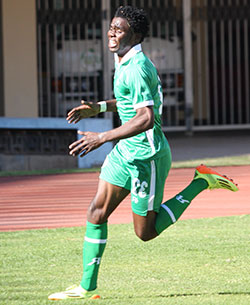 ON a day when leaders Highlanders and defending champions Dynamos dropped points, Caps United made most of slip by their rivals, beating Chicken Inn at the National Sports Stadium on Sunday to stay in the hunt for the league title.
With the three points, Caps remained in fourth position with 30 points, one behind Dynamos and ZPC Kariba and two behind leaders Highlanders. Hwange are fourth on 27 points after they held ZPC Kariba to a 0-0 draw at Gwanzura on Saturday.
Caps United regular penalty take Ronald Pfumbidzai saw his penalty kick saved by Chicken Inn goalkeeper Elvis Chipezeze in the 13th minute before Kelvin Bulaji thrust the Green Machine ahead two minutes later after getting the better of defender Lawrence Mhlanga.
However, Bulaji did not last the entire match as he was stretched off injured moments later.
Just like against Dynamos last week, Caps struggled in the second half with Taurai Mangwiro’s men preferring a defensive mode.
That allowed Chicken Inn to come to them with Bheki Ncube’s header cleared off the line by Stephen Makatuka before goalkeeper Tafadzwa Dube made two point blank saves from Ncube and Ishmael Lawe as the Bulawayo side poured forward.
But the goal would not just come for the Bulawayo side and coupled with results from elsewhere, they dropped to 10th place on the standings with 20 points, juts one above the relegation cut off point.
Joey Antipas, the Chicken Inn coach said Caps defended well.
“We played very well, especially in the second half, but Caps also defended well. We had our chances but could not convert,” Antipas said.