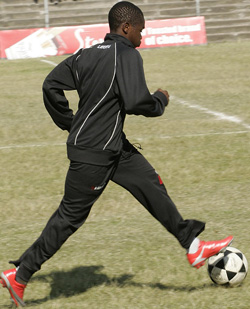 CAPS UNITED’s title defence suffered another reversal on Wednesday after they stuttered to a 1-1 draw against Bulawayo City at Barbourfields Stadium.
After a 2-0 defeat to bitter rivals Dynamos in the Harare derby on Sunday, Caps United were looking to recover and secure maximum points to push their case in the bid to retain the championship.
The Zimbabwe champions, however, found themselves trailing after a 32nd minute goal by Bulawayo City’s Ishmael Wadi.
Lloyd Chitembwe’s men who were without injured Tafadzwa Rusike struggled for fluency but came alive in the second half in which they threatened with some dangerous raids in their opponents goal.
The champions were rewarded in the second half with new boy John Zhuwawo popping up with a beautiful leveller on 46 minutes to secure a precious point.
Caps United were welcoming chief striker Dominic Chungwa and defender Justice Jangano who missed the Sunday match due to suspension.
The duo’s return, however, could not stop Bulawayo City from grabbing the precious point.