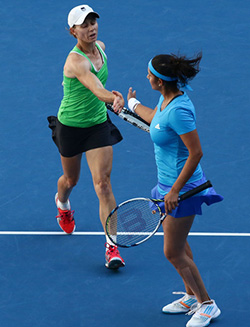 CARA Black and India’s are through to the semi-finals of the WTA China Open in Beijing, after playing just one match in the tournament so far.
Sania joined up with Cara in Beijing, fresh from her medal haul at the Asian Games in South Korea where she won the mixed doubles gold medal and the women’s doubles bronze medal.
The Indo-Zimbabwe duo had a bye in the first round and received a walkover in the second round.
On Thursday, they defeated the seventh seeded Spanish duo Garbine Muguruza/ Carla Suarez Navarro 6-3, 6-1 to move into the last four, where they will meet Kristina Mladenovic/ Anatasia Pavlyuchenkova.
The French-Russian duo upset fourth seeds Racquel Kops-Jons/ Abigail Spears 3-6, 7-6, 10-6. Also moving into the last four were fifth seeds Shuai Peng/ Andrea Hlavackova.
The last remaining quarter-final will take place on Friday where top seeds Sara Errani/ Roberta Vinci meet Alla Kudryavtseva/ Anatasia Rodionova.
Cara and Sania have enjoyed a fairly successful September run-in to the end of the season, making it to the semi-finals of the US Open, successfully defending the Pan Pacific Open doubles title in Tokyo and qualifying for the BNP Paribas WTA finals in Singapore.
With Sania at representing India at the Asia Games in South Korea, Cara teamed up with Caroline Garcia of France to make it to the finals of the Dongfeng Motor Wuhan Open in China.Advertisement