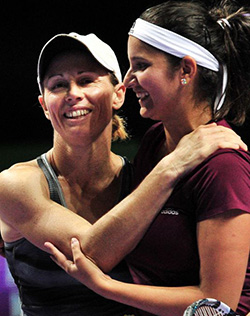 CARA Black and Sania Mirza reeled off 12 straight games to stun defending champions Hsieh Su-wei and Peng Shuai by the record score of 6-1, 6-0 in the WTA Finals doubles on Sunday.
The Indian-Zimbabwean team, playing their last match together, lost the first game against the favourites but then put together the phenomenal streak to lift the Martina Navratilova trophy in Singapore.
Mirza, 27, was making her tournament debut, while 35-year-old Black has won the title twice before with different partners and appeared at 10 straight WTA Finals between 2000-2009.
They had one Premier Mandatory title (Beijing in 2013), two other Premiers (Tokyo in 2013 and 2014) and an International (Oeiras in 2014).
But Sunday’s victory was their fifth and biggest WTA doubles title together. It will also be their last together a subject they discussed in their post-match interviews.
“I’m just slowing down a little bit,” Black commented.
“Sania is in the prime of her career at the moment, and I said to her at the US Open that I’m not sure what I’m going to do next year and how much I’m going to play.
“I’m just struggling with my body a little bit. There have been some matches where I haven’t been able to recover the next day. So to be fair to Sania, I think it was fair to tell her.
“Also travelling with a baby is not easy. It’s been fantastic, and I’ve enjoyed it, but it has been very stressful at times. I just want to wind down a little bit and see where the next step takes me.”
“I have to respect it,” Mirza declared. “I’ve learned so much from her. She’s a great champion. And as athletes, we need to accept that things change and things end.
“We started off winning two of the biggest tournaments of the year in Beijing and Tokyo last year, and to end this way, we couldn’t have asked for a better start or end. Winning here in Singapore just kind of sums up our partnership.
“And I’ve found a great friend in her. She’s like a sister to me. Whether we play together again or not – hopefully we will, she keeps making these comebacks! – but our friendship will live on forever.”
Advertisement