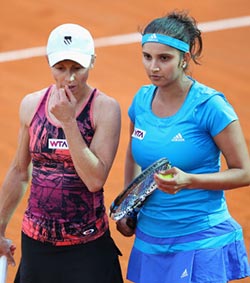 CARA Black and India’s Sania Mirza thrashed the pair of Martina Hingis and Russian Vera Zvonareva 6-2, 6-4 to progress to the second round of Wimbledon Women’s doubles on Wednesday.
The Indo-Zimbabwean pairing suffered a bit of a hiccup early in the match when Cara, on a comeback run, lost serve in the third game of the opening set.
The fourth seeds then combined well, the Indian dominating from the baseline, holding the pairing together as they won five straight games to close out the set.
Playing on an outside court, before a packed, late-evening gallery Cara and Sania charged to a 5-2 lead in the second set. The Indian’s nerve shook when she was serving for the match in the ninth game.
Cara and Sania then broke the Russian in the tenth game, closing out on their second match point which the Hyderabadi set up with a thunderous forehand.
Advertisement