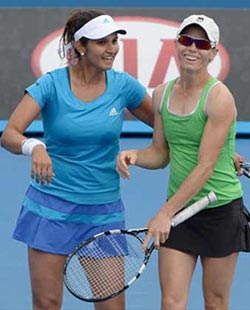 TENNIS ace Cara Black and her Indian partner Sania Mirza squandered a position of strength to go down to world number one Italian combo of Sara Errani and Roberta Vinci in a hard-fought women’s doubles quarterfinal match at the Australian Open Tuesday.
The sixth-seeded Indo-Zimbabwean combination lost 2-6 6-3 4-6.
Cara and Sania, who were leading 4-1 at one stage in the third and deciding set, simply wasted the opportunity to cause a major upset and lost to the higher-ranked opponents in an hour and 48 minutes contest.
The top seeds will take on the winner of the match between fourth seeds Kveta Peschke and Katarina Srebotnik and unseeded Jarmila Gajdosova and Ajla Tomljanovic in the semifinals.
The Indo-Zimbabwean pair gave a tough fight to Errani and Vinci as they won a total of 81 points as against 89 by the Italians.
But as many as 24 unforced errors dented Sania and Cara’s chances. Errani and Vinci lived up to their top billing in the opening set as they comfortably sealed it off by converting three of the five break points, while saving one of the two that their rivals got.
But Sania and Cara fought back in the second set to stun the Italian girls.
The Indo-Zimbabwean duo hit 11 winners as opposed to eight by the Italians, while they also converted three of the five break points to take the game to the decider.
In the final set, they started off with a bang and opened up a 4-1 lead. But just when it seemed that they would wrap it up easily, the top seeds came from behind to make it 4-4.
The Italian combo saved six of the eight break points to have the last laugh.Advertisement