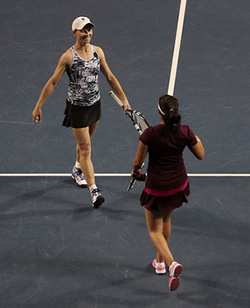 THE India-Zimbabwe pairing of Sania Mirza and Cara Black became the fourth women’s doubles pair to qualify for the BNP Paribas WTA Finals Singapore in October, the Woman’s Tennis Association (WTA) announced this week.
In a statement, the WTA said this is the first time the pair will make their appearance at the competition.
The confirmation comes after the pair successfully defended the WTA Pan Pacific Open doubles title in Tokyo, Japan on Saturday.
It will be Mirza’s first showing at the event, unlike Black, who will be making her 11th appearance in the competition having qualified for the previous 10 years with three different partners – Elena Likhovtseva, Rennae Stubbs and Liezel Huber.
Black and Mirza will compete in the eight-team doubles competition, joining Sara Errani and Roberta Vinci, Ekaterina Makarova and Elena Vesnina, and defending champions Peng Shuai and Hsieh Su-Wei, who qualified earlier.
“Cara and I are excited to have qualified for the WTA Finals and look forward to competing against the best teams in the world,” Mirza said.
“I’ll be making my first appearance at the season finale while for Cara it’s the first time since she became a mother, so we have lots to celebrate already.
“We’re having a great year and we hope to continue that success with a great run in Singapore.”Advertisement