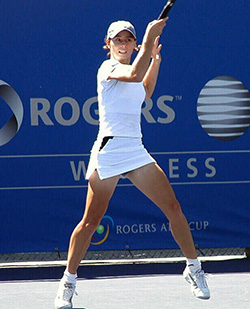 ARA Black and Sania Mirza needed five match points, while surviving one against them, to close out Raquel Kops-Jones and Abigail Spears and earn a semifinal spot at the BNP Paribas WTA Finals Singapore presented by SC Global.
Cara Black and Sania Mirza recorded a dramatic quarterfinal victory over Raquel Kops-Jones and Abigail Spears on Thursday at the BNP Paribas WTA Finals Singapore presented by SC Global.
Down 3-2 in the first set, the third-seeded Black and Mirza won four straight games to take the set. But the Americans cruised through the second set to force a match tie-break.
Black and Mirza got out to a seemingly insurmountable 9-5 lead, before Kops-Jones and Spears won five points in a row to set up their own match point. But Black and Mirza steadied themselves and won three straight points to finish off a 6-3, 2-6, 12-10 victory.
“It was a pretty exciting ending there,” Black said. “We’ve had a great year together and we’ve been through a lot of moments like that. We just remained strong and came through it. We’re just so happy to be here to celebrate our year, our friendship and our partnership. It’s just really exciting.”
Black and Mirza are now 3-1 against Kops-Jones and Spears, with this being far closer than their last encounter, a 6-2, 6-1 rout for the Zimbabwean-Indian duo in Montréal in August.
“It’s been a great experience,” Mirza said. “To pull off a match like that in my first WTA Finals match is pretty insane, I think. We’re just happy to be alive to fight another day.”
Black and Mirza’s semifinal foes will be the winners of Friday’s quarterfinal clash between No.1 seeds Sara Errani and Roberta Vinci and Kveta Peschke and Katarina Srebotnik. They are 1-4 against Errani and Vinci and 1-0 against Peschke and Srebotnik.
“We’ve played both those teams this year on different courts in different cirucmstances,” Black said. “We’ll take a look at that quarterfinal match, but we will enjoy this win for sure.”
Black has two WTA Finals doubles titles under her belt alongside Liezel Huber, while Mirza is making her debut at the season finale.
Cara and Sania are also playing their last tournament together.
Sania, who has split up with Cara, will partner Chinese Taipei’s Su-Wei Hsieh from next year.