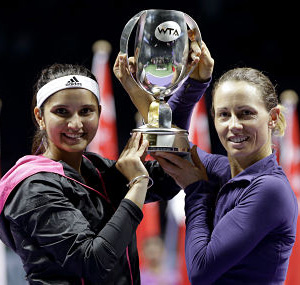 THEY had to save match points in their first two matches of the week, but everything clicked in the third – Cara Black and Sania Mirza steamrolled Hsieh Su-Wei and Peng Shuai on Sunday to lift the season-ending BNP Paribas WTA Finals Singapore doubles crown.
Black and Mirza’s road to the final was anything but routine – they fought off a match point to beat Raquel Kops-Jones and Abigail Spears in the quarterfinals, then three match points to get by Kveta Peschke and Katarina Srebotnik in the semifinals.
Mirza joked after that semifnal match on Saturday, “I hope we don’t have another match like that, because my heart’s not able to take it anymore!”
Much to her delight, this one would actually be nothing like the other two.
After Peng held serve to open the match, the No.3-seeded Black and Mirza stormed through 12 games in a row to hand the No.2 seeds and defending champions a 59-minute, 6-1, 6-0 loss. They never faced a break point.

“We saved the best for last,” Mirza said. “We’ve played together almost all year, I think, and it was at least one of our best matches. It was definitely the best match we’ve played against them.”
“We came out and didn’t give them any free points,” Black said. “Like Sania said, it was one of the best matches we’ve played against them. We had a game plan, and I think we executed it well.”
It was their fifth and biggest WTA doubles title together. They had one Premier Mandatory title (Beijing in 2013), two other Premiers (Tokyo in 2013 and 2014) and an International (Oeiras in 2014).
But it will be their last, too – while much has been made of Hsieh and Peng’s partnership wrapping up in Singapore, Black and Mirza will be splitting up too.
Hsieh and Peng had been 12-0 in WTA doubles finals together coming into this one, but those 12 games in a row put an end to that – and, as mentioned above, a partnership that has seen them collect Grand Slam titles at Wimbledon in 2013 and the French Open in 2014, and the WTA Finals in 2013.
“First I would like to thank Peng Shuai,” Hsieh said.
“I wasn’t in really good shape this year, but finally we made it to the WTA Finals, and we played really well in our first two matches. In the final Cara and Sania were just too good – serving well, volleying well – they were just too good for us today.”Advertisement

“We wish we could have won today; I don’t think we’ve ever lost 12 games in a row like that,” Peng said.
“But they’re a really good team. Cara had amazing reactions at the net. And it was a good result for us. Su-Wei and I have had some amazing results together and I want to thank her for everything.”

PERFECT SWANSONG FOR CARA AND SANIA