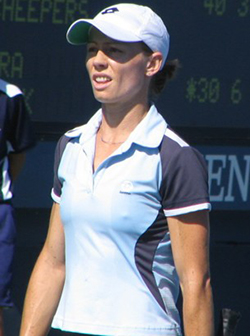 ZIMBABWE’S Cara Black continued her progress at the US Open on Saturday, breezing into the third round of the women’s doubles as she seeks her second Flushing Meadows title.
Cara is also through to the quarter finals of the mixed doubles.
Playing with India’s Sania Mirza in the women’s doubles, the third seeds dispatched Caroline Garcia of France and Romania’s Monica Niculescu 6-1, 6-2 in less than an hour.
Cara and Sania will now face the unseeded Serbian-Czech duo of Jelena Jankovic and Klara Koukalova for a place in the quarter-finals.
Jelena and Klara upset the 13the seeds Anabel Medina Garrigues/ Yaroslava Shvedova 4-6, 6-2, 7-5.
Meanwhile, Cara is also on course in the mixed doubles with India’s Leander Paes.

Seeded third, the Zimbabwean and Paes are through to the quarter finals where they will face the US-Mexican pairing of Abigail Spears and Santiago Gonzalez.
Cara, who turned 35 this year won the US Open in 2008 and was runner up the following year.Advertisement