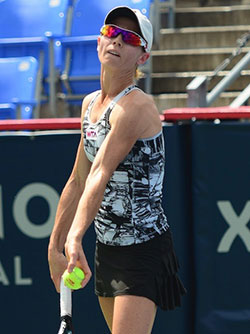 ZIMBABWE’S Cara Black and Indian partner Sania Mirza bagged the women’s doubles title at the WTA Pan Pacific Open in Japan on Saturday.
With the win, Cara and Sania successfully defended their Tokyo Open title, which is a $1 million event.
The Indo-Zimbabwean partnership claimed a 6-2, 7-5 victory in the final over Spain’s Garbine Muguruza and Carla Suarez Navarro.
The pair took just an hour and 15 minutes to dispose of the Spanish challenge as their opponents were no match for them.
Cara and Sania had a greater percentage (73%) of points won on first serve while they broke their opponents seven times in the match, earning the prize money of $44,835.
Saturday’s triumph was Cara’s second title of the year after she won the Portugal Open in May with Sania.

Meanwhile, in the singles Ana Ivanovic of Serbia ousted top seed Angelique Kerber in straight to reach the final on Sunday against US Open finalist Caroline Wozniacki.
Third seed Ivanovic charged back from 3-5 down in the first set to beat the 26-year-old German favourite 7-5, 6-3 in the semi-finals.
Denmark`s Wozniacki, seeded second and looking to get over her loss to world number one Serena Williams in the US Open two weeks ago, outplayed Spaniard Garbine Muguruza 6-4, 2-6, 6-2 in two and a half hours.
Advertisement