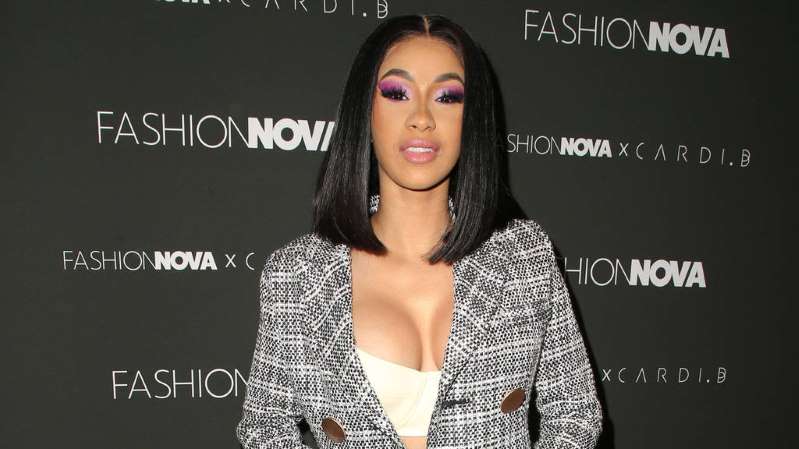 Cardi B discovered she had earned five Grammy Award nominations from reporters as she left a New York courthouse on Friday (07Dec18).

The rap sensation was summoned to appear before a judge in Queens to face two misdemeanour charges for reckless endangerment and disorderly conduct after she was threatened with arrest for skipping her original arraignment hearing on Monday (03Dec18).

As a result, she spent Friday morning dealing with her legal issues and missed the initial announcement detailing the shortlist for the 2019 Grammy Awards, for which she is a top contender.

After she was released without bail, Cardi was met by a throng of photographers and reporters outside the courthouse, where she was asked for her reaction to her five Grammy nods.

“Cardi, how do you feel about being nominated for a Grammy?” one journalist shouted, to which the excited rapper replied, “I am…? How many nominations?”

She then shared her delight at the handful of mentions, and has since posted video footage of the exchange on Instagram.

“What a way to find out i got 5 Grammys nominations (sic),” Cardi captioned the NBC News clip.
“I’m tellin you my life is a movie,” she continued. “I work my a** off for this!Win or not atleast i know i had a chance and people was watching and admiring my work.Im Soo happy!THANK YOU (sic)!”

Her debut release, Invasion of Privacy, is up for Album of the Year and Best Rap Album, while her I Like It hit with Bad Bunny and J Balvin will compete for Record of the Year. She also snagged a nod for Best Rap Performance for Be Careful, and her Girls Like You smash with Maroon 5 will contend for Best Pop Duo/Group Performance.
The winners will be announced at a Los Angeles ceremony on 8 February (19), days after Cardi must return to court for the next hearing in her ongoing criminal case.

She was slapped with the charges in October (18) after turning herself in to authorities following a reported altercation with sisters Jade and Baddie Gi at Angels Strip Club in Queens in August. She has since been ordered to stay away from her two alleged victims.