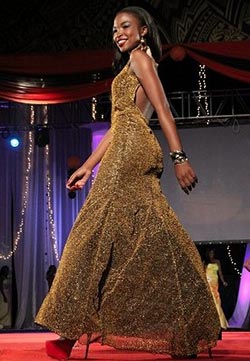 THE Carnival Queen beauty pageant, spearheaded by the Zimbabwe Tourism Authority (ZTA), lacks national representation, critics have complained.
The reservations were expressed Friday during a sashing ceremony for the ever-smiling carnival queens held at a Harare restaurant on Friday.
Carnival queen patron Barbara Mzembi, wife to the Minister of Tourism and Hospitality, Walter Mzembi officiated at the event
Out of the ten provinces in the country, only five were represented; these were Harare, Bulawayo, Masvingo, the Midlands, Manicaland and Matabeleland South.
Harare had the highest number of participants with seven, followed by Bulawayo which had five whilst Matabeleland South, Masvingo and Manicaland had the lowest number of contestants, registering two each.
However what raised eyebrows among the crowd was the absence of participants from the three Mashonaland provinces as well as Matabeleland North Province.
Terrence Mutsvangwa, the director for a local anti-corruption group questioned the criteria used to select participants, hinting at possible irregularities in the process.
“It is difficult to understand why other provinces were left out of a supposedly national empowerment agenda,” said Mutsvangwa.
David Chidende who also attended the ceremony concurred with Mutsvangwa, adding that national processes must always be inclusive in order to reap results.
“A national process that excludes others lacks credibility and its relevancy becomes questionable,” said Chidende.
Still, organisers maintain that the pageant was never meant to be discriminatory adding efforts were made to ensure that all interested parties were involved.
“We did the scouting for the beauty queens in Harare, Bulawayo, Gweru, Masvingo, Mutare and Beitbridge. Again, before the scouting process, we ran adverts on television and radio as well as distributing fliers,” said Dananai Chipunza, the current carnival queen.
Contacted for comment Shuga Chagonda, the ZTA spokesperson, maintained that there was everything was above board.
“The selection was based on the internationally prescribed standards such as age group, height and academic qualifications. A contestant must also be single at the time of the competitions. Of course there were also financial constraints that might have prevented others from participating,” said Chagonda.Advertisement

Started in 2013 to showcase the country’s cultural diversity through beauty, this year’s pageant will be held on the 16th of May.
This year’s hotly contested edition will see one lucky winner becoming a beauty and carnival Ambassador for Destination Zimbabwe at various international carnivals and forums.