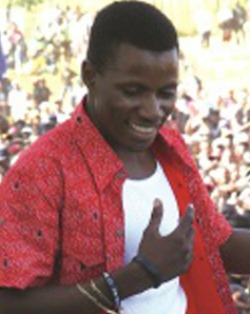 AFFIRMATIVE Action Group President, Chamu Chiwanza was, Wednesday night, booed by Sungura musician, Peter Moyo’s fans for blaming the current cash crisis for his “shameful” token to the young musician’s DVD which was being launched in Harare.
Chiwanza was the guest speaker at the colourful event which was held at the Harare Exhibition Park’s Dandaro Inn when he bought Moyo’s DVD for $150.
All the other people who supported the young Igwe, as Peter Moyo’s is also affectionately known by his followers,  either paid over $300 or pledged to effect some electronic money transfers to musician’s bank account for the DVD.
“I went to the bank three times for me to access this $150.The first time, they gave me $50 and I went in again and I was given another $50 and for the third time they gave me another $50 before they told me not to come again,” said Chiwanza to the booing fans who expected him to pay more.
Peter, who is son to the late Kwekwe based Sungura musician, Tongai Moyo, was launching a DVD from his last year album Nyasha Dzamwari.
The DVD launch fetched more than $5000 in sales for the new project most of which was, however, in pledges owing to the cash crisis the country is facing.
The DVD was bought by mainly music promoters who came in their dozens to support the young musician.
At the show, Peter took his fans down to the memory lane when he played a number of songs composed and sung by his late father.
His bass guitarist and the Utakataka Express prodigal son, Spencer Khumulanu, stole the show when he went on a solo guitar performance exhibiting his talent.