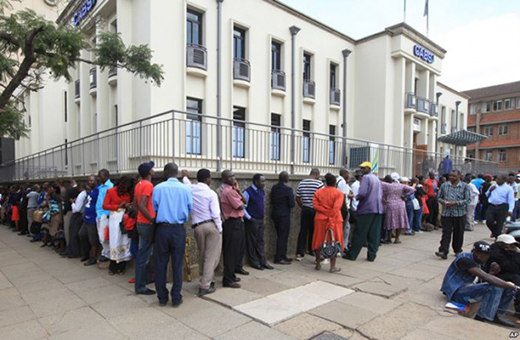 HARARE: Cash shortages in Zimbabwe are worsening as the introduction of bond notes – set for November – to stem the problem becomes imminent.
Some banks have reduced monthly withdrawal limits for individuals from $100 (R1 381) a day to between $20 and $50, while companies are now allowed daily withdrawals of up to $500, down from $1 000.
ZB Bank, in which the government has a controlling stake, appears to be among the hardest hit, with branch managers’ first task in the morning being to tell anxious clients whether or not there is cash for withdrawals.
Mobile money banking has not been spared either, with recipients who had become used to getting instant cash now having to hop from one agent to another looking for money.
Anxious clients
With some banks giving out very little, some people are now opting for retail shops which can give up to $100 as cash-back for plastic money purchases of $15 and above.
Despite assurances that their US dollar values will be maintained, many Zimbabweans have remained sceptical over the impending introduction of bond notes, to be effected in small doses of small denominations of $2 and $5 equivalents.
The notes will be supported by a $200 million facility from the Africa Export and Import Bank (Afreximbank). An initial $75 million worth of bond notes will be injected into the market by the end of the year.
Vice president Emmerson Mnangagwa said last week that the government was crafting a law that would support the introduction of the bond notes and Zimbabweans should prepare themselves for their coming.
“It is going to be reality. We are going to live with it. Those who can easily realise that reality should begin to accept that bond notes will be with us,” he said when he hosted a lunch following the opening of the 4th session of the 8th Parliament by President Robert Mugabe.
However, opposition parties and other interest groups are reportedly waiting for the promulgation of the law so that they can challenge its constitutionality.
Reserve Bank of Zimbabwe governor John Mangudya said this week that the release of the notes had been moved to early November from the earlier planned end of October to allow their marketing.Advertisement

He told the weekly private run newspaper, the Financial Gazette, that while, there was public scepticism over the notes, they would help maintain the current multicurrency system rather than eliminate it.