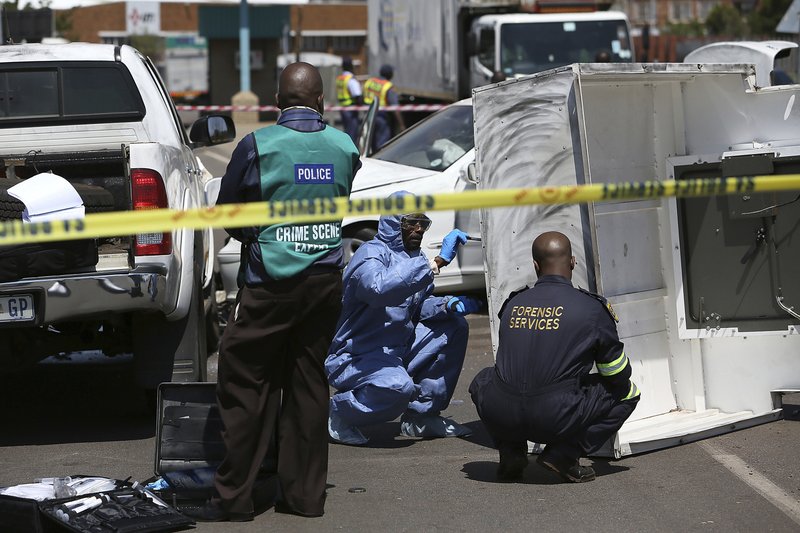 Some bystanders manage to film the urban, often daylight attacks and post the footage on social media, magnifying concerns in a country that struggles with a high rate of violent crime.

Authorities are boosting intelligence work and other efforts to tackle the heavily armed gangs, whose members appear to have specific roles: shooter, lookout, driver.

“It’s almost like everyone’s got a skill of his own,” said Yusuf Abramjee, a South African anti-crime activist. “These people strike with military precision.”

They might be getting help from rogue police officers, and local media have reported the possible use of stolen military weapons in some heists.

There have been 75 attacks on vehicles carrying cash this year, compared to 31 in the same period in 2017, said Kalyani Pillay, CEO of the South African Banking Risk Information Centre, or SABRIC. Just under 40 percent of the attacks were thwarted. Two civilians, one police officer, five guards and nine suspects were killed in this year’s robberies and another 93 people were injured, Pillay said.

Thieves carrying out such heists have stolen 63 percent more money this year than in the same period in 2017, according to Pillay. She declined to say how much, though the amount is estimated to be at least several million dollars.

Unions representing workers involved in the transport of cash held protests in major cities in June for more protection on the job. “Stop bombing our cash vans,” read a sign at a march in Cape Town.

A parliamentary committee held a hearing on the attacks.

Meanwhile, the rate of attacks on security guards transporting cash on foot between, for example, a business and a vehicle has dropped.

That suggests criminal syndicates are going after more vehicles on the road because they are likely to yield more loot — and that the thieves think they can get away with it, partly due to heavy firepower. Security experts say police, whose response was sometimes lackluster in the past, are more pro-active.

Heist methods have varied over the years. In 1997, thieves in Bronkhorstspruit dragged a spike chain across a highway to block a security van and killed two guards. The hit was reminiscent of a scene in the 1995 movie “Heat” in which a gang uses a spike strip to thwart police pursuit after robbing an armoured car.

Today, heist teams in South Africa can consist of 10 to 15 people who blow open armor-plated security vehicles with commercial explosives possibly siphoned off from the mining industry. The teams seem comfortable making their move in crowded areas.

Video of an attack on security vans in May in Boksburg, near Johannesburg, shows a man with a long rifle, apparently a lookout, kneeling at an intersection. An explosion is heard and gunfire crackles. A couple of motorists do hurried U-turns to escape the scene.

Separate video of the same attack, filmed from what appears to be a car showroom at the same intersection, shows smoke rising after an explosion. Three blasts are heard.

“Oh my God! Look how many of them are coming out,” a woman says as suspects emerge from a car.

A third video of the aftermath shows a badly damaged security van and banknotes strewn over the road.

In raids last week, police arrested a female police officer who allegedly stored weapons used in the Boksburg heist, as well as her 32-year-old boyfriend. Nearly two dozen people were arrested in the sweep.

Gangs involved in such heists include some people from neighboring countries including Botswana, Mozambique and Zimbabwe.

Police Minister Bheki Cele has said more must be done to stop related “feeder crimes” including carjacking, illegal gun sales and police corruption. Cash heists were down sharply in June compared to May in a sign of improved policing, he said.

Security companies, meanwhile, can do more with technology including dye that stains money if there is a robbery or a foam that automatically covers cash in a vehicle’s vault and makes it impossible to remove, said Abramjee, the anti-crime activist.

About 200 people are believed to be “spearheading” the attacks in South Africa, one security company said in response to questions from The Associated Press. There have been 27 attacks on Fidelity Security Group vans this year and just under half were “successfully defended,” it said. Four employees were killed and 55 were injured.

The company said it has spent millions of dollars to upgrade vehicles, increase training and take other measures against the threat.

“Unfortunately, as we introduce more measures on land and in the air, the modus operandi of criminals also evolves,” Fidelity said.